Week 17 Fantasy Player of the Week

For my week 17 Fantasy player of the Week, I am going to step away from my standard rules here, and give the award to the player who single-handedly beat me in my only championship game. I suspect any of you who were in championships facing this guy know who I am discussing: Tampa Bay WR Mike Evans. 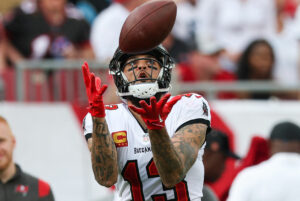 Mind you, I have nothing against Evans, even though I don’t have him in any of my leagues. But like previous years, it seems one guy always goes off during championship week (remember Alvin Kamara’s 6 td game?). This year, Evans was the guy: 10 catches, 207 receiving yards, 3 td’s, 48 fantasy points. He almost single-handedly kicked me out of the championship.

I tip my hat to you, Mike Evans!

So who was your fantasy player of the week this week?

Brandon Aiyuk. Started him as a fringe play in the South Beach league, but his 22.20 points mark the highest score of my entire roster so far (I hope Josh Allen will change that tonight) and put me in a good position to claim the title after MNF.

Honorable mentions go out to Patrick Mahomes, Austin Ekeler and Amari Cooper, whose strong performances helped me blow my main rival in my SFLEX dynasty out of the water. Even if it was only the match for #3 this year.

Same to Daniel Jones, Travis Etienne and Dalton Schultz in my 1QB league. Had I reached the final, I would have won it against any opponent, as my team put up the highest score in the league this week. Sadly, I was only in the consolation bracket, and while it’s nice to have won it, it’s worth nothing in that league.

Damar Hamlin, who would hand me two league Championships (and the Chiefs the #1 seed) if they don’t ever finish that game.