Week 16 Fantasy Player of the Week

With Jalen Hurts out this week, I needed somebody else to step up in my two playoff teams. My South Beach team didn’t have anyone step up, and I lost. But my home league had 3 guys step up to lead my 10-5 team over the best team in the league at 13-2. The three guys were Alvin Kamara (19 points), Jaylen Waddle (25 points), and Brett Maher. But it was Maher who had the most points, with 30, from 4 FG’s and 4 PAT’s. So Maher gets his second Fantasy Player of the Week award this week. 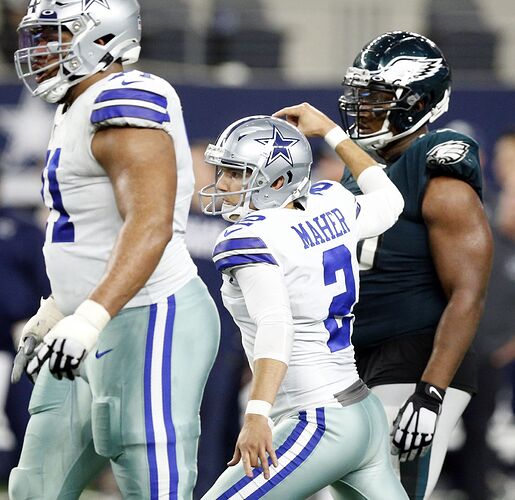 This league has a different scoring system for kickers. To give you an example, my opponent started Nick Folk, who only missed 2 PAT’s, finishing with -6 points on the day. This system penalizes misses heavily, even as it rewards successes more.

Mind you, I haven’t officially won this game yet, but I feel pretty good about my chances. He still has Tom Brady and Keenan Allen going, but he needs 74 points from them. I feel pretty confident.

I have to nominate the Chargers D this week, who helped me advance to the South Beach championship game.

It was no coincidence I had selected them. While they were one of the lower-scoring D/ST units all season, that had a lot to do with them having one of the most terrible schedules for Ds. However, the few times they had favorable matchups, they had been able to capitalize on them. Overall, they had performed above expectation.

In week 16, they had the most favorable matchup of all Ds. And they delivered.

The initial plan had been to leave them in the lineup for week 17 as well. On paper, the Rams are the 4th best opponent for Ds. But that didn’t stop them this week from sending the Lions home with negative points. The Lions D has been underperforming all season, but that still leaves some concern going into the most important week of the season.

My honorable mention goes out to Gardner Minshew, whom I should have started over Justin Herbert (I had considered it). Here’s hoping Minshew finds a starter job next season.