Week 14 Player of the Week

This was a rough week for me. With a lot of players out with injuries or on bye, what was left didn’t do well, to the point I went 0-5 in all my leagues. Only one player stood out: QB Jalen Hurts. 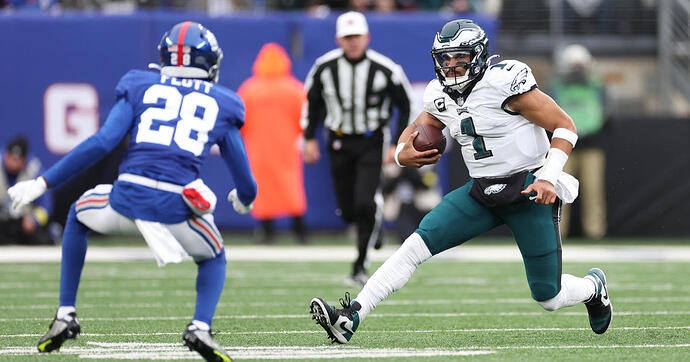 Hurts showed his usual domination, with 217 passing yards, 2 pass td’s, and 77 rushing yards, for a total of 30.38 fantasy points. This is the third week in a row he has won this award, and 4th time this season.

So who was your player of the week?

Once again, it’s difficult for me to name a player.

My most important matchup was in the US-EU league, as playoffs started in week 14 there. None of my players stood out (except for the Kansas City D), but most played well enough. That my opponent was unfortunate enough to start Kyler on QB helped me secure an easy W and advance to the semifinals. But nominating Kyler would probably be a bit cynical, and against the spirit of these threads.

So I will nominate 2 players from my SFLEX tournament league:

Brock Purdy, who looked rock solid while destroying the GOAT and his Bucs.
And Chris Moore, whom I grabbed and plugged into the lineup as a last-minute move that turned out to work very well.

Honorable mentions go out to 2 recent rookie additions that I really love to have on my dynasty rosters going into next season: Zonovan Knight. who is the unquestioned RB1 for the Jets now, and could come in very handy in the playoffs. And Chig Okonkwo, whom I claimed off waivers a day before his breakout and might start him over Mark Andrews in the playoffs.