Week 15 Fantasy Player of the Week

It is almost a cliche that big players come up big at the end of the season. The last three weeks, Jalen Hurts has had over 30 points each week. Think he smells playoffs? Yes, he did it again this week, with 36 points against the Bears. That makes him my fantasy player of the week yet again. It’s starting to get beautifully redundant. 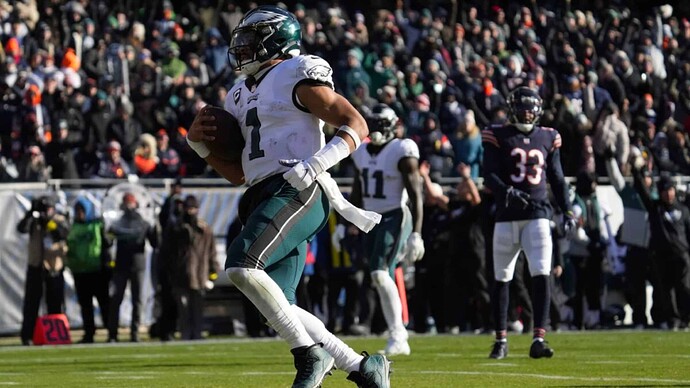 Sure, Hurts had some mixed passing numbers today: 315 pass yards, but also 2 picks. On the other hand, he had rushing numbers most RB’s would love: 61 rushing yards and 3 td’s. Add in a 2 point conversion, and you have, as John Madden would have said, “BOOM!”

It was a good week for the most part. My player of the week has got to be Hurts as well. I don’t have him on my team but I do have a combination of AJ Brown and Smith peppered in my money leagues.
But for the south beach league it’s got to be McKinnon

For once, this is easy for me this week: Josh Allen. He was the key piece in my South Beach W.

Got eliminated in the US-EU semifinals, so all players there get a thumbs-down from me. Lazy gits.