Herbert looks to be out. The Vegas line went from LA by 10 to 3, When big money makes that kind of change I hit waivers for a QB.

I have Schultz and Josh Jacobs likely to miss as well. Damn, 3 starters out and only week 3 with no byes. What is yet to come and will we have another visit from a covid based variant?

After seeing the Minny pass D I picked up Goff, had Ertz and depth for now.

Anyone else getting hit>

I wish I had started Trubisky. He would have given me 17.05 points on SFLEX, which would have been perfectly fine this week.

Now that both Jakobi Meyers and Gabe Davis are questionable, I may be forced to start Michael Carter and Greg Dortch on SFLEX and FLEX. Or I’ll make a complete gamble and start Romeo Doubs, in case he really turns out to be the only healthy WR in Green Bay.

Now that both Jakobi Meyers and Gabe Davis are questionable

It looks like Davis is going to play, and I am starting him in the only league I have him: 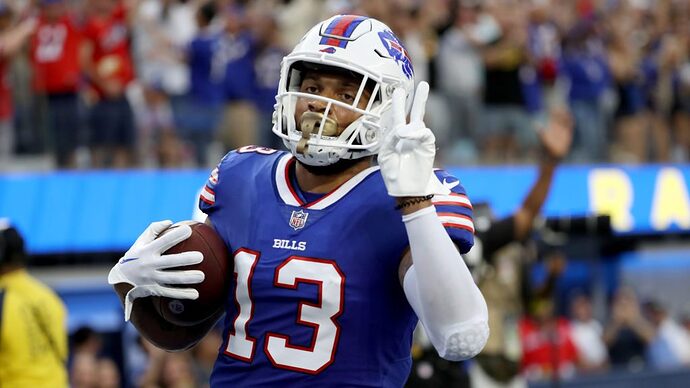 Given that the Bills defeated the Titans 41-7 on Monday, you’d be forgiven if you didn’t realize Buffalo’s offense was missing one of its key weapons.But receiver Gabe Davis suffered an ankle injury late in the practice week and did not play in...

I have Schultz and Josh Jacobs likely to miss as well.

When I saw Jacobs was likely to miss, I went through my rosters and pulled Zamir White up to a few flex positions. ZEEEEUUUUUS!

As for Schultz, I am actually working on a trade deal with him. I’ll let you know if I pull off that one. Meanwhile, I have Isaiah Likely as my starting TE this week. I know, it’s ugly, but the kid gets some targets in Baltimore’s offense. At TE, that’s at least a decent floor, especially when he has a high catch rate. How many top 12 TE’s tend to be 0-fers until the week when they catch a td or 2? I’ll take the few points Likely will give me until he has his breakout game.

As for my other injuries, losing Hunter Renfrow hurts this week, especially after it looked like he was getting more targets last week. But I dug into the Raiders well for a decent replacement: Mack Hollins. He had 12 PPR fantasy points last week, and I have liked him since he was with Miami. He does start opposite Davante Adams, so you know the safeties will be cheating away from Hollins. Considering the Raiders have Tennessee this week, even better!

Speaking of Renfrow, I lost him and Alvin Kamara in my home redraft league. Renfrow was no big deal since he wasn’t starting anyway (I have AJ Brown and Jaylen Waddle there). Kamara was my flex play, but I replaced him with Garrett Wilson. Not a big downgrade from projections.

Back to Renfrow, in my second dynasty money league, he’s out as well, along with James Conner. Renfrow was a flex before, so no great loss, as yet again I replaced him with Mack Hollins. Conner was the one who hurt the most, and I replaced him with Cordarelle Patterson from my flex position. In the flex (note there are 2 flex positions in this league, on top of the superflex), I pulled up Zamir White. ZEEEEEEUUUS!

I know, I keep a lot of Raiders as backups on my teams. But they are cheap, and sometimes pay off. Zamir White is one who I have high hopes for going forward in dynasty, as I can see him replacing Josh Jacobs soon.

After seeing the Minny pass D I picked up Goff

Very good move; Goff is likely to be a top 5 QB this week.

Jacobs followed the team today after staying home yesterday with illness. He is now expected to play and has a good match up.

I saw that. I may split the difference, and only play White in a league where I need him.

Latest- Jacobs, Schultz and Dobbins will be limited if they play. Pass on all this week.

Herbert may play and I heat it is IF he takes a pain shot. Can’t believe LA would do that to their franchise guy. I changed to Mariota.

Jacobs, Schultz and Dobbins will be limited if they play.

Not necessarily. I stepped into the “even if he plays, he will be limited” trap myself often enough to avoid it these days.

Teams don’t deploy a player if they don’t think he can produce for them. I would generally not bench an active player just because he was questionable all week.

Jacobs, Schultz and Dobbins will be limited if they play.

Not necessarily. I stepped into the “even if he plays, he will be limited” trap myself often enough to avoid it these days.

Teams don’t deploy a player if they don’t think he can produce for them. I would generally not bench an active player just because he was questionable all week.

I do agree but not here, Dobbins had not played in over a year and had just 7 carries.
Schultz had a half practice Sat after missing during the week, owner said only out a week and plays MNF, easy move on.
Team leaves Jacobs home sick, he pays his own way to come and see if he can play. Too much for me, I’m going to the Dolphins game.

I would add Herbert. Doctors tell him not to take the pain shot, to consider long term. He still wants to think about it and the team lets him. Nothing but indecision and confusion for the team and it showed, I went Mariota.

No abpve move hurt me except keeping LA’ s D and K when I knew better.

I avoid risky injury plays. Sometimes they pan out, but most times they come back to bite you.

I lost by half a point last night. The injuries did not cost me the game but were responsible. Herbert forced me to add a QB and drop Dallas who I was considering starting.

I play the back up and was going to add Dallas on Monday to start but, could not because I dropped them and had to wait until after waivers which I forgot.

The loss was just meant to be.