Why would the Dolphins throw out a good passing QB with two of the best WR’s in the game, for a running QB? 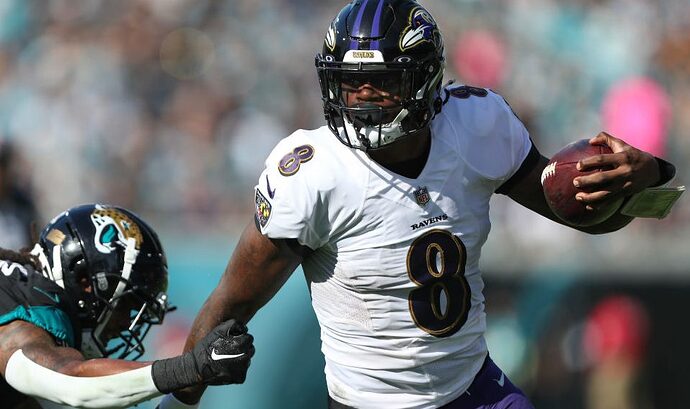 Dolphins could make a play for a franchise-tagged Lamar Jackson, after the...

The signs currently are pointing to the Ravens applying the non-exclusive franchise tag to quarterback Lamar Jackson, if they can’t sign him to a long-term contract.That would allow other teams to negotiate with Jackson and sign him to an offer...

If the Dolphins do this, they deserve to lose.

I can understand it. I don’t like it, but they may be forced to move on from Tua. I said earlier that his concussions may cut his career short. And those concerns haven’t grown smaller ever since.

Now if Lamar is the right choice for them is another question. First, because he brings injury concerns of his own. And second, while he is a very competent passer, I’m still not sure he’s the right guy to entertain one of the most explosive WR duos the league has seen in a while. There is a reason the Ravens gave him Bateman and Duvernay, instead of Hill and Waddle.

Tua is not the answer in Miami. Injured each year, concussions, last year of rookie deal are not even the biggest reason. He has not learned and progressed, still making the same dumb rookie mistakes in throwing into triple coverage and TOs. Add in not finding his second read which is silly for year 3.

We planned to be able to replace him by having two 1st rounders but our idiot owner lost one by talking to Brady and made a questionable trade for Chubb.

Jackson may not be an ideal choice but a big upgrade with Hill aging.

You might want to add Miami or Dolphins to your title.

You did not watch tape of every snap for Tua over the past three years, more than once.

That is true. But what I saw left me under the impression that Tua may be undervalued.

Still, there are doubts around him, especially regarding his health. I did acknowledge that the Dolphins may be forced to move on from him.

I just don’t see how Lamar Jackson is the best solution. He will cost them a ton of money, has quite the injury history himself, and much as I love to watch him play, I doubt that he’s the kind of QB who could help them win a title.

This could turn into another “Russell to the Broncos” scenario.

Our best option in the draft are no longer here and Jackson is the best available I see. I believe McD, who I really like, can make him work.

Have you seen the potential free agent QB’s out there? (aside from Lamar)

Admittedly, some of these guys may get franchise-tagged, re-signed by their current team, or retire. But NONE of them have played with two superstud WR’s like Tyreek and Waddle. And Brady has already flirted with Miami once. Plus, Brady still did better than both Tua and Lamar throwing the ball: