How did everyone make out yesterday?

I hit my main targets in Lions J Williams with Swift reported out for 2 games and 4 TD’s so far. I got lucky in another league with Olave.

I drafted well enough that I did not need to make any waiver moves this week.

SFLEX dynasty: that league always had intruguing options in recent years. This year, the waiver wire pretty much dried up. I added Trestan Ebner as a speculative TAXI stash, but am not too optimistic about him.

Mack Hollins is still on the waiver wire, but to be perfectly honest, I think in a dynasty league, it’s okay to leave him there.

In my 1QB dynasty, I placed a bid on Zay Jones. Had waiver priority #4. Sadly, the #2 also wanted him. I picked up Ben Skowronek, but doubt that he will stay on my roster for too long. He does well and plays solid, but I don’t think he has a lot of upside beyond what he’s showing right now.

No bids in redraft #1 (this time intentionally). In redraft #2, I upgraded my backup QB from Wentz to Goff. My bid on Doubs was unsuccessful, but since I have Pittman, Waddle, Amon-Ra, Lamb and Curtis Samuel in that league, that’s fine. I did get Khalil Herbert, though, which was much more important, as I intend to start him this week.

And my tournament league processes waiver claims only tomorrow morning. I’m still in desparate need of a QB in that SFLEX league, as my QB1 was Lance. Joe Flacco saved me this week, but next week, Zach Wilson will be back. The available options are Baker Mayfield, Mitch Trubisky, Cooper Rush and Brian Hoyer, and I can’t decide which of them I find least terrible.

The available options are Baker Mayfield, Mitch Trubisky, Cooper Rush and Brian Hoyer, and I can’t decide which of them I find least terrible.

Rush is the safest of the bunch. Decent, albeit unspectacular, floor. But I suspect we haven’t seen his true upside yet.

Cooper Rush scored 15 points per game so far as a starter. And it looks like Dak could be back next week already, so Cooper would have only 1 more game to show us his true upside.

From a real-life football POV, Rush did great. From a fantasy perspective, not so much.

My low bids on Baker Mayfield and Mitch Trubisky were both successful. So for the moment, I even have a bench QB now. Both of them aren’t any better for fantasy purposes, but at least they don’t have a firm expiry date yet.

Not sure about Dak being back in 2 weeks, when he hasn’t even started really throwing or practicing yet: 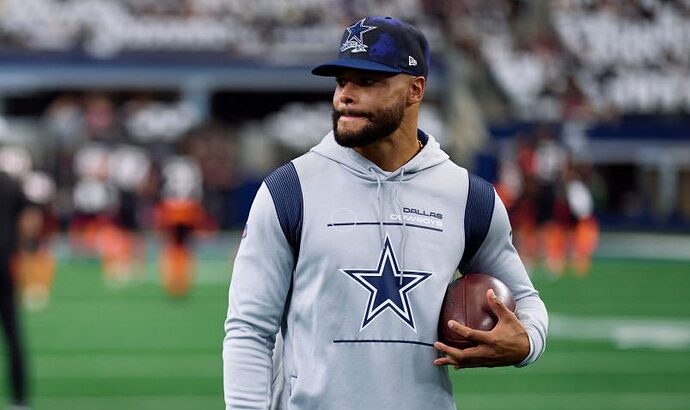 Dak Prescott had stitches removed from his surgically repaired right hand Monday and threw a few soft tosses, but he is not ready to return to practice yet.The Cowboys’ practice report shows Prescott remains out. “He’s been conditioning,” Cowboys...

That doesn’t surprise me. He is working out, but he is not touching the ball yet. Which is understandable, considering he broke the thumb on his throwing hand. Start using the hand too early, and it may break again.

But once the thumb is considered fully stable, he won’t need a ton of practice. This injury will not have a huge impact on his throwing mechanics (nb: not “none”, but “not a huge”). An experienced QB should be able to regain a good feeling for the ball within just a few training sessions.

If the Cowboys knew he would be back earliest in week 6, they would have put him on IR. They didn’t, and I think there’s a good chance he’ll be back in week 5.

Handcuffs are handy for police, kinky lovers and fantasy football managers: Alexander Mattison has handled 11, 24, 32, 32, 25 and 16 touches in six games with Dalvin Cook (shoulder) sidelined over the past two seasons. His dominant first-team preseason usage indicates that this role should still be on the table under new head coach Kevin O’Connell. Mattison and Khalil Herbert are behind Jamaal Williams in this week’s waiver wire pecking order because the former backs don’t boast the same sort of standalone value, but the Vikings’ superior offensive environment is enough to give Mattison the nod over Herbert should both Cook and David Montgomery miss Week 4.

Just something something for a laugh on handcuffs.