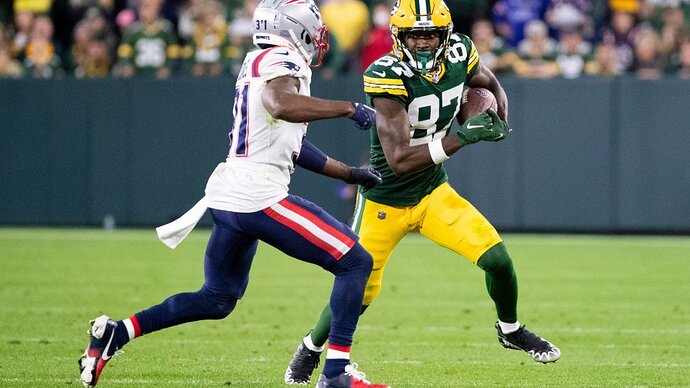 NFL Week 4 is nearly a wrap, and Mike Boone and Romeo Doubs are among the top fantasy football waiver wire targets.

Here is a run down of what is available and color me unimpressed. Pickens will have vale but the question is when and if Pickett can hold the job.

I really do not see any player of interest right now unless desperate. If so, check with Zak, He pulled 2 HOFers out of thin air in Jacobs and Goff.

In my deepest dynasty superflex league (also a money league), I am going after RB Caleb Huntley from Atlanta. While helping Tyler Allgeier (who I already have) fill in for the injured Cordarelle Patterson (who the Falcons put on IR today), Huntley ran 10 times for 56 yards and a td. With Damien Williams also on IR (at least until week 6), Huntley makes an interesting flex play, at least for a week, and maybe longer if he keeps playing like this.

In my big money deep dynasty league, I am looking to add RB Deon Jackson of Indianapolis. With Jonathan Taylor being hurt, but with a gimpy ankle and having to play on Thursday too, that might leave just Nyheim Hines and Deon Jackson to split the RB workload. I also added a second waiver request for QB Skylar Thompson of Miami. nobody knows Tua’s return timeline, which would leave the preseason rookie QB hero of Miami as Teddy Bridgewater’s only backup.

In my twitter-based redraft league over at NFL.com, no money involved, I am adding RB Tyler Allgeier and dropping RB Michael Carter. Carter isn’t seeing the touches now that Breece Hall has semi-broken out. But Allgeier is playing with the Cordarelle Patterson injury, and doing a good job with it too: 10 carries for 84 yards, and 1 catch for 20 yards.

As for the South Beach league…wouldn’t you like to know?

In recent years, my WW headache was usually following a “so many interesting options, but no free roster spots” scheme.

This year, I have free bench spots in some of my leagues, and even in shallower leagues, there is no one on the WW screaming “add me!”

Pickett would be a nice addition in 2QB leagues, but you won’t find him on the WW in those formats. Especially not in dynasty leagues.

Mike Boone is a speculative add for RB-needy teams, such as my rebuild project in my 1QB dynasty. But with Melvin Gordon putting up an abysmal performance yesterday, I wouldn’t be surprised if the Broncos acquired outside help for the position. David Johnson, Devonta Freeman, Jordan Howard, Devontae Booker and other free agents are potential candidates.

Or they will trade for a player like Ronald Jones, who costs next to nothing.

Derrius Guice, who’s been cleared by the league, and desparately tried to find a team for the last 18 months now. Reportedly, he’s in good shape, and he’s still only 25 years old.

Or Julius Chestnut. The rookie has just been waived by the Titans. In TC, I liked him better than Hassan Haskins.

If any of those names shows up in the news in relation to the Broncos, they will be on my bench in an instance.

As for the South Beach league…wouldn’t you like to know?

Forgot one player that I will add in my SFLEX dynasty: Will Dissly.

Dissly was great in his rookie and sophomore seasons already, but always got injured very early. In the last 2 years, he was very quiet, as he was eased back into action after his torn achilles in 2019.

But this year, he looks like his old former self again, and has great chemistry with Geno Smith. He is TD dependent, as he sees only 3 targets per game. But one of them is usually in the end zone. And he catches everything you throw in his direction - 100% catch rate on 12 targets.

There are certainly worse TE stashes than Dissly, who will become my TE2 behind Mark Andrews. Feels good to have him back on my roster, after I had to cut him with a heavy heart last season, when it became clear that he would not bounce back in 2021.

Mike Boone is a speculative add for RB-needy teams, such as my rebuild project in my 1QB dynasty. But with Melvin Gordon putting up an abysmal performance yesterday, I wouldn’t be surprised if the Broncos acquired outside help for the position. David Johnson, Devonta Freeman, Jordan Howard, Devontae Booker and other free agents are potential candidates.

Or they snatch Latavius Murray from the Saints while they attempt to move him back from the active roster to the practive squad.

Little talent and my roster is tight. Want to see that Swift stays out to keep Williams.

Allgiers could be interesting but Robinson is coming off IR and WR J Williams is not far behind. Mostert could fill in but very fragile and Pickins for future.

That’s it and not much interest right now. Whoever Ed wants will not make them better or raise my interest.

Things got worse. I see that Algieirs plays TB and SF. Pickins plays Buff, TB, Miami, Philly and has a bye. So much for that.

Burks is doubtful and cannot go on IR to sit for a month. Gordon is questionable and old. Add in for me that Swift is not out and has an outside shot at playing.

Wake me when it’s over. lol

HC at Wash expects to have RB Robinson off IR for week 5. He needs a roster spot. Add in I cancelled my Mixon trade for Andrews as I have not heard back. The other manager lives in Mexico and was having many problems last week, Hope he is OK.

Robinson will be RB #6 but J Williams will be gone after this week. Gonna have to get creative with roster spots.

I am disappointed in the trade not going through,