Lockett out at least one game

I have to start 3 WRs in a 12-team league. With Lockett being out in week one of the playoffs I need a replacement. Have St. Brown and JuJu as starters and Burks on the bench. WW is thin…M. Gallup P. Campbell, E. Moore, N. Collins, Jameson Williams, M Goodwin (WR2 next week). Any thoughts?

Difficult to say, as most of these players have another game before week 16, and any injury to either a WR or a QB in their team could change the picture entirely.

I’d grab Jameson Williams, as an insurance in case something happens to Amon-Ra.

Gallup is not an option, Dallas play the Eagles next week. I wouldn’t start top tier WRs agains them, and Gallup is far removed from the top tier.

Elijah Moore is highly risky, with the entire QB situation being up in the air once more for the Jets. This week, Zach Wilson will get another start, and he widely ignores Moore. Who knows what next week will bring.

Nico Collins still isn’t practicing. Last week, Chris Moore was a fantastic plug-and-play WR off waivers, but the team situation is fluid here as well. The Texans have a fantastic matchup in week 16, though. But it’s too early to say who of the WR corps will feast.

Campbell is way too risky for my liking. And I wouldn’t expect Marquise Goodwin to pick up where Lockett left.

All very valid points. I’m trying to set up for the playoffs since my team is in and this week will not matter even if I lose. I was thinking Williams but could be a tough match in week 16 at Carolina, week 17 is better at home against Chicago where Goff has gone off (if I make the championship game). Thoughts on Hilton with the Cowboys? Slim pickings out there…

I was thinking Williams but could be a tough match in week 16 at Carolina,

Carolina isn’t that terrible as an opponent. Mid-tier defense. Sure, there are better matchups, but you can’t have the Vikings, Titans or Raiders every week.

My bigger concern is if you can trust Williams’ volume. Right now, you can’t, and I doubt that will change after this week.

Thoughts on Hilton with the Cowboys? Slim pickings out there…

I don’t know, man. Hilton was picked up in almost every league I play. I don’t see it, though. Complete gamble. 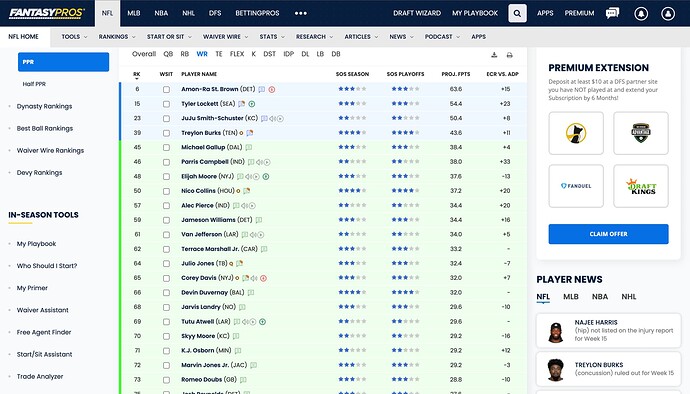 No option I’d call better than Amon-Ra, JuJu and Burks at least.

Stash Jameson Williams as a safety blanket for Amon-Ra.
Or stash Nico Collins, and if he doesn’t come back next week, replace him with Chris Moore (if available).

Thanks, man. I was good until Kupp went down.