Fantasy Player of the Week, Week 3

As of now, I have Brandon McManus and Jerry Jeudy left in two leagues, and McManus only needs 23 points to win one game for me, but even that isn’t enough to make him my fantasy player of the week this week.

Last week, Hunter Renfrow had a concussion, so he missed this week’s game against the Titans. Who do I have on my bench in my two dynasty money leagues? Mack Hollins, the Raiders other outside WR.

In all honesty, I have seen this guy play for years with the Dolphins in a minor role. While he looked impressive every time I saw him, it wasn’t “Davante Adams” impressive. He’s a big boy (6’4" 221 lbs.) with decent hands. When the Raiders acquired and promoted him, I liked the move. So far this year, he has been kind of quiet, although improving: 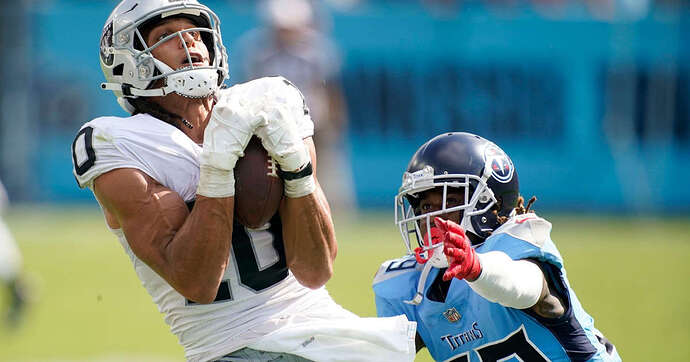 So who was your fantasy player of the week this week? Feel free to wait until after Monday night’s game to name your guy.

Most of my leagues are pretty much closed out.

SFLEX dynasty: Mark Andrews. This game is still close, and I may lose it against one of the weaker teams in our league. I’m leading by 21 points, but he still has Jimmy G playing right now, and CeeDee tomorrow. I’m pretty angry with myself that I did not have the courage to start Romeo Doubs. Activated him off TAXI earlier this week, put him in my lineup, only to switch him for Gabe Davis when it was clear that the latter was active. That cost me 11.1 points.

Single QB dynasty: an expected L against the strongest team in my division. It was closer than expected, though, all my players performed well, but none stood out.

Redraft 1 (South Beach) should be a W, I’m leading by 40 and he only has Kittle and Deebo Samuel going. Again, my players did well, but none stood out.

Redraft 2 (US-EU) should be a W, too. I’m leading by 7, he has Russell going right now, and I still have CeeDee and the Giants DEF coming up tomorrow. Again, solid team production, but no one stood out.

The tournament looks like another L. Trailing by 28, he has Aiyuk playing right now, I still have CeeDee and Pollard coming up. My standout player here was Chris Olave. Sadly, I did not start him. Had I started him over Brandin Cooks, those extra 16 points would have given me a fighting chance.

So - the best player I started was Mark Andrews.

And my notable mention is Romeo Doubs, who showed a breakout performance today, suggesting the preseason hype was not a fluke.

Gonna wait until tonight. I need Cee Dee to score 20 and I go 3-0 in our South Beach League, not a redraft but a start up hybrid league.

I won two leagues but lost my sore spot Euro league to go 0-3.