Fantasy Over the Hill Gang

These are the players who have hit the “no longer productive age” at their positions:

These players are mostly expected to have big drop offs this coming season but the same was expected of many this past season. They disagreed and proved it on the field. The question is if their fountain of youth can put off Father Time this year.

Who is worth a high pick and who should be cut or passed over?

My biggest question for now is with my 2 first round picks which project to be #2 and #3 behind Sicarios. I thought he wold drop Kupp as his keeper and make a pick but now not as sure.

He is loaded at RB but only Pittman and Sutten at WR without Kupp. He will be 30 but the more I see and hear about him has me thinking he will be a top 3 WR this season.

I’m seriously thinking of taking him over Johnston but may not have that choice.

Brady and Rodgers were QB12 and QB13, respectively. You won’t get anything for them in dynasty, but they can be reasonable mid-round picks in redraft, assuming they don’t retire.

Ekeler, CMC, Henry, and Chubb were all in the top 5 at RB this year. I would say Henry is the least likely to repeat, just based on his touches (382). The other three will likely be top 5 picks in redraft, but probably won’t get you much value in dynasty, although I’d still continue to hold them at this point.

As for Mixon, I think we see the cliff happening with him, as he only played 14 games. I wouldn’t take him any higher than as a mid-round pick in redraft. If you have him in dynasty, start looking for a replacement.

For WR’s, Hill, Adams and Diggs are still top 4 and elite. Elite WR’s don’t typically hit an age cliff, but rather trail off, although Hill worries me because his production is mostly based on speed. It’s hard to say what will happen with him once he starts to lose that. But I would still draft these guys early in redraft. In dynasty, it may be time to trade them for value, if you can. If not, just hold them.

Kupp is a strange one to consider. before his injury, he was elite, possibly the most elite. I would probably take him in redraft, late 1st round. In dynasty, hold him until we see how he produces next year. If he gets off to a strong start, I’d look to deal him for value. And don’t just trade him to get rid of him. If you can’t get any value, then just hold him.

Allen, Lockett and Evans are at the end of their value. In redraft, they are mid-round picks at best. In dynasty, they are throw-ins on larger deals. They won’t sell a trade by themselves.

At TE, Kelce is head and shoulders above everyone else. Even if his production dips, I doubt he will fall below the top 5 at TE. In dynasty, Pitts is the only one who can possibly rate higher.

Good breakdown and agree. I did forget Cook who is around the same as Mixon.
Kelce was named fantasy MVP by PFF and is an early pick #1 by a couple of guys at CBS.

I expect having to make a decision between Kupp, Johnston and the third RB in our draft, which will affect you as well likely picking next. Very tuff choice.

I expect having to make a decision between Kupp, Johnston and the third RB in our draft, which will affect you as well likely picking next. Very tuff choice.

Johnston? Who is that?

The #1 rookie WR in this draft from TCU and I see no other close.

Ah yes! Quentin Johnston! He’s an alpha-to-be. The three times I watched TCU, I was impressed with him.

He and Jameson are similar. He is 6’ 4" and 215 to go with 4.4 speed along with knowing the game with route running, breaking tackles, etc. 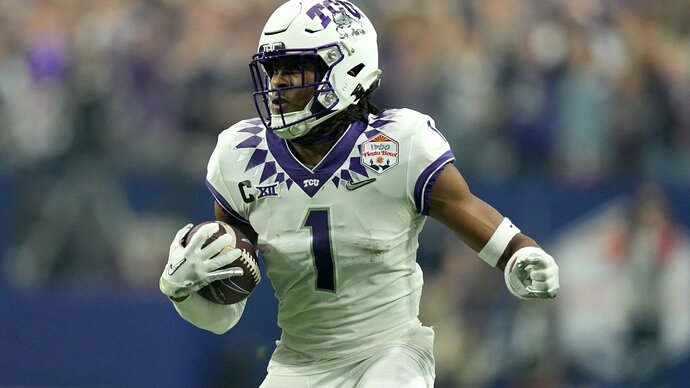 Breaking down Clemson WR Quentin Johnston's skill set and projecting his value in the 2023 NFL Draft.

One of his potential teams, the Jaguars, is a scary good fit. He instantly steps in as an alpha, allowing Christian Kirk to become more of a 1b WR, along the lines of a DaVonta Smith to Johnston’s AJ Brown. Trevor Lawrence would instantly leapfrog to a top 5 QB.

Remember that the Jags will also have Calvin Ridley next year. We don’t know how much he will have left in the tank, but if the Jags indeed draft Johnston, they could turn into a “too many mouths to feed” passing offense. Similar to the Jets this year, where Garrett Wilson’s upside was also limited by that.

I still wouldn’t hesitate to draft Johnston, but would be prepared to maybe have to wait 1-2 years until he breaks out.

For WRs, the player-team combination is indeed very important. In 2021, we had 2 exciting combinations in Chase and Waddle. Both top talents, bot reunited with their former college QB, both coming into teams with rather few pass catchers on the roster. And, as expected, both players broke out immediately, and still keep improving.

In 2022, there was not a single player-team combination among WRs that got me excited. Drake London, Garrett Wilson, Chris Olave and Treylon Burks are as fine WR talents as they come. Add Jameson Williams, whom we knew would miss most of his rookie season due to injury.

In redraft, you didn’t miss anything if you ignored the rookie WRs. If that repeats in 2023 is indeed entirely dependent on landing spots. The top talents will still make their way, but it may take them 1-2 years to break out if they end up in a crowded receiver room, or with a team that still has question marks at QB.

Remember that the Jags will also have Calvin Ridley next year.

Excellent point. It’s hard to say how or if he will come back. The guy is a head case.

Who is worth a high pick and who should be cut or passed over?

The only player from your list whom I may be intrigued to spend a high pick on in redraft is CMC. He has shown that he can stay healthy for a full season (didn’t surprise me), is in a great team situation and simply a beast on RB. And he’s not that old yet.

Tyreek should also have another good year or two. But there are younger players who will get pretty close in production, but can be drafted at significantly lower costs.

Kelce can be the #1 TE for yet another year. Or he can decide tomorrow to hang up his cleats. He’s getting too old for me to want to invest in him.

Kittle was never one of my favorites. He always has a few really great games every season, that push him into the top 5. But even when healthy, he can also disappear entirely in other games. In general, I prefer players with a more consistent production. Kittle won’t help me if he scores 30+ or even 40+ at the end of the regular fantasy season, driving my team into the playoffs almost single-handedly, only to then put up 3 points in every playoff game. Ask his 2021 owners how that feels (no, I was not one of them).

Never been a Kittle fan from a fantasy POV, and probably never will be.

Kittle’s injury history is what soured me on him.

You bring up some good points, specifically: Do you spend your 1st round draft capital on keepers who may not be keepers in the coming years? Guys who will give you immediate bang for the cost, but who you may not keep next year?

For example, I took Dalvin Cook last year. I don’t feel any need to keep him versus the 1st round pick. On the other hand, do I expend 1st round draft capital on a talented rookie like a Bijon Robinson or CJ Stroud? Knowing that if they pan out, I’d have to give up my 1st round pick next year, and possibly for years to come? CMC suddenly looks better in that scenario, even though I may only get a year out of him. Then again, if a rookie is truly good enough, giving up the 1st round draft capital suddenly isn’t so bad. Decisions, decisions…