Vikes or Bengals Def this week

Who better option as both look interesting but cant have both . If keep both then will have drop Pickens who is also there for depth and bye weeks

Thanks and good luck !!

Cinci has the edge with Minny a good choice as well. I went with KC for 2 good home match ups coming.

YTD, Minnesota is easily better than Cincy, outscoring them by an average 2 point margin. However, in this week’s projections, Cincy has a narrow 0.7 point edge. Personally, I think this is a mistake. Carolina is still playing hard, even if they don’t know when to keep their helmets on. Minnesota against Washington seems like an easier matchup, and I’d take Minnesota.

Who better option as both look interesting but cant have both . If keep both then will have drop Pickens who is also there for depth and bye weeks

If you mean Hines is still in Indy, think again: 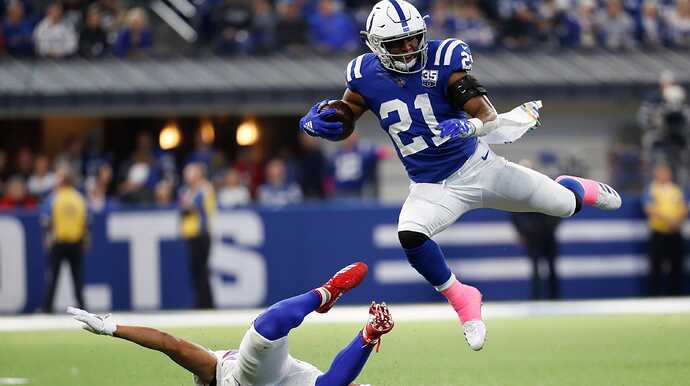 The Bills traded for Colts RB Nyheim Hines in exchange for RB Zack Moss and a conditional sixth-round pick that can become a fifth-round pick.

On the bright side for Deon Jackson, it might be another week before Zack Moss acclimates to the Indy offense. This could be another good opportunity for Deon to claim that 3rd down role, which he looks really suited for. I suspect Deon’s 14 catches on 14 targets this year has cemented his role in Indy’s offense, and made Hines expendable. Moss will more likely work as a JT replacement.

As for Hines, I honestly don’t like him going to Buffalo. Josh Allen doesn’t check down as much as most pocket passers, so there isn’t a lot of opportunity for Hines. Just ask James Cook, who has disappeared in Buffalo.

On the other hand, I wouldn’t drop Pickens now, as he is likely the primary beneficiary of the Claypool trade to the Bears. If you need a WR, you could probably even start him this week.

Thanks so much and good luck

Vikes or Bengals Def this week

Not a big difference. The Vikings have the better matchup, but underperformed so far this season (3rd best schedule in weeks 1-8, but only the #13 D/ST).

Bengals have a mediocre matchup, and have performed within expectation so far (#26 schedule, #26 D/ST).

Hines for me. Jackson flashed briefly in weeks 5 and 6, and then disappeared. Now he’s competing with Zack Moss and Phillip Lindsay, and I think he will lose that battle.

Hines has a pretty notable contract that’s valid through the 2024 season. The Bills will not acquire one of the best pass-catching backs in the league if they didn’t have a plan for him. If he will become fantasy relevant is another question, but at least there’s some potential.

Minny has a very slight match up edge but is on the road which in my view negates it. Both are good choices. I hope mt KC is better.

Jackson flashed briefly in weeks 5 and 6, and then disappeared. Now he’s competing with Zack Moss and Phillip Lindsay, and I think he will lose that battle.

It should be noted that the Colts won both weeks where Deon played a significant role. Then Hines and JT came back, and they lost both games since then, making their record minus Deon 1-4-1. Coincidence?

Also, why did the Colts suddenly feel good about trading away Nyheim Hines? Could it be Deon’s 14 catches on 14 targets this season? At this point, it has to be speculated that Deon is a better receiving back than Hines.

As for the backups Moss and Lindsay, it’s notable that Lindsay had to be activated from the practice squad and not Deon. That tells you where the coaches put their faith. As for Moss, he is still learning the playbook. He might see a limited role if the coaches like what they see in practice, or he might just ride the bench this week. But I expect Deon owns the 3rd down role for now, and the other two can fight it out over the early downs. I also expect Deon to continue owning the 3rd down role even after JT returns.