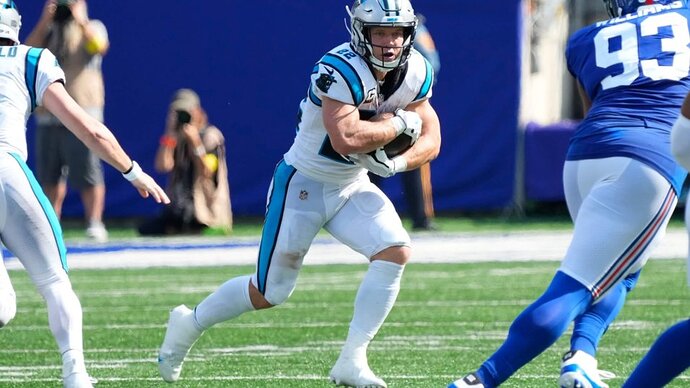 A very good read on which RBs are getting the ball

Eight running backs played at least 70% of their offense’s snaps: Christian McCaffrey (93%), Leonard Fournette (86%), Saquon Barkley (86%), David Montgomery (80%), Joe Mixon (76%), Josh Jacobs (75%), Jonathan Taylor (73%) and Najee Harris (71%). Each is cemented as a bell-cow back, with Jacobs being the notable surprise. Note that Jacobs has been losing pass-down work to Brandon Bolden (hamstring) and Ameer Abdullah, but he’s still a weekly upside RB2 as long as Josh McDaniels keeps the committee at two players as opposed to three.

Running backs that played over 60% of their offense’s snaps and should work as the leader of their committee more weeks than not: Dalvin Cook, Ezekiel Elliott, Javonte Williams, Austin Ekeler, Dameon Pierce, James Robinson, Michael Carter and Rhamondre Stevenson. Note that Pierce and Robinson are a bit more game-script dependent than the other parties involved due to Rex Burkhead and Travis Etienne soaking up plenty of pass-down work, while Stevenson’s status as the Patriots’ most fantasy-friendly back is contingent on Ty Montgomery (ankle, IR) staying out of the picture, Damien Harris staying healthy and Pierre Strong Jr. (shoulder) not getting more involved.

I disagree on Stevenson but can’t argue with numbers. I’m happy to have # 5 and # 6 but Jacobs was a lucky pick who fell to me late.