Feel free to make any comments about college football’s games today. We have the top teams in the nation all playing. Scouting nirvana!

I caught a little of the Alabama-Kansas State game. After a slow start, Bama just completely outclassed them. I kind of lost interest because it became obvious Kansas State was just not up to Bama’s standards.

In TCU-Michigan, I am rooting for TCU, but especially QB Max Duggan. Aside from that one interception, he’s looked ok, although Michigan is playing tough pass defense.

Max Duggan reminds me of Josh Allen. If you shut down his passing game, he’ll burn you with his legs. If you stop him from running, he’ll shoot your eyes out.

I’m not sure if it is just TCU’s defense is that good, or Michigan’s offense is over-rated. But the Michigan possessions look like a mismatch.

When things aren’t going your way… 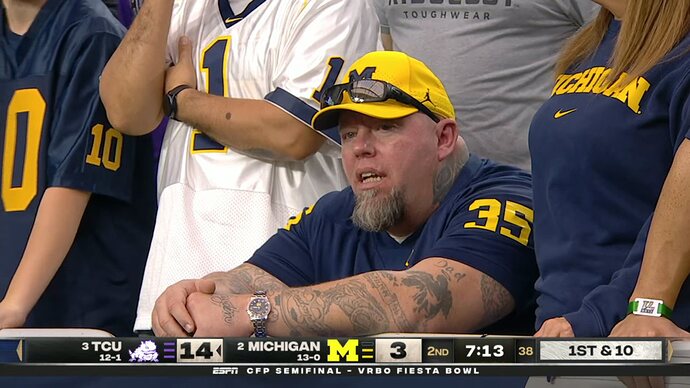 Keep your eyes on the prize… 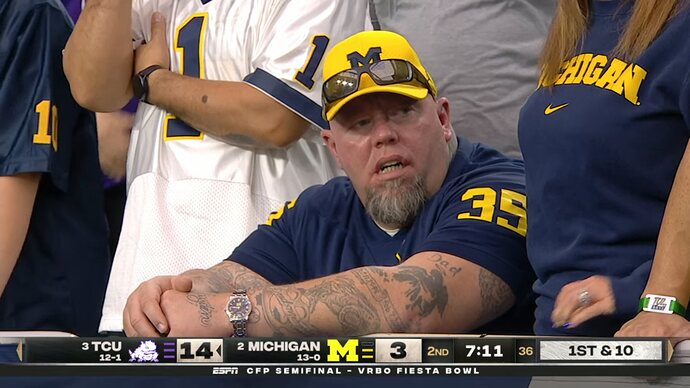 Just when Michigan gets within one score, TCU turns on the afterburners. They are plucky!

Safe to say this Michigan QB is no Tom Brady! Two pick sixes in a bowl game? Pathetic.

I need a nap after that game!

Congrats to TCU! They earned it!

Gotta love a QB named Stetson Bennett! The last QB with that good a name was Colt McCoy!

Tale of the tape for today’s QB’s:

Bennett will have a tough time selling the NFL on his size.

Earlier today, I was talking about WR Quentin Johnson as a future alpha WR. Ohio State’s Marvin Harrison Jr. might be even better. Marvin Harrison’s son didn’t fall far from the tree.

That 2nd td from Stroud to Harrison was an amazing play for both of them. If an NFL team manages to get both these guys, they could be the next Burrow-Chase, possibly better.

So far, I haven’t seen anyone on Georgia who wows me. But they have a bunch of players who play together well. I don’t see them having a dominant presence in the NFL Draft’s 1st round, not like last year.

I stand corrected. The Georgia o-line basically brought the pain to Ohio State in that last drive. There may be a few there who get 1st round picks.

I just don’t see Stetson Bennett ever doing much on the NFL level. But for those of you in CFL or USFL or XFL fantasy leagues, watch out!

EDIT: No penalty, but it still looked dirty.

Georgia TE Brock Bowers made an incredible catch. Not one I’d expect from a TE.