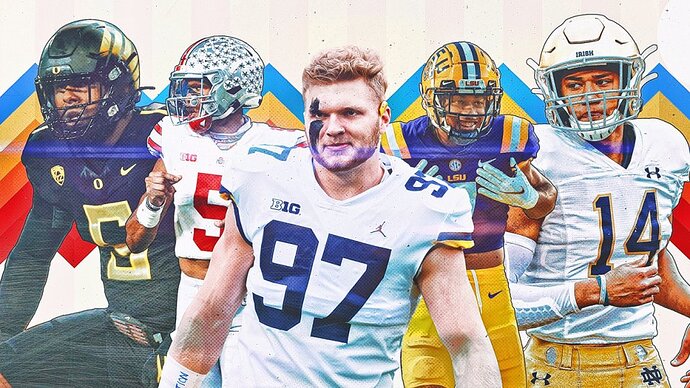 PFF's Big Board for the 2023 NFL Draft offers three-year player grades, combine measurables, position rankings, and in-depth player analysis for all of the top draft prospects.

My first copy from PFF did not include the tool bar to go to positions for Fantasy.

This one does and is a VG read to see the upcoming rookie class which is special.

Mildly entertaining. But until I see the Combine results, this is moot.

The draft went off just fine without the combine last year. Did you take a year off?
GMs have said their drafts are at least 90% complete before the combine.

This repert comes from PFF who supply data to 32 NFL teams and 102 college teams. They grade every player for every snap in every game and this article reflects how players have done.

It is worthwhile to know who is who for those watching college, millions of fans doing mocks and all fans who like to look ahead and discuss next year.

I understand, but I like the Combine. It gives me objective data for the smaller school players.

Doing mocks while the current season is still in full swing and playoffs haven’t even started yet?

Mocks and rookie rankings are great during the offseason, when there is nothing else to do.

Last season, I started working on my rookie rankings only after the NFL draft. Draft capital and landing spot are 2 extremely important factors when evaluating rookies.

Also, PFF has at least 1 player high on their rankings who already declared he’ll return to college.

Mocks aside, I like seeing who is considered a top player now and watching movements up and down from this point. It also adds to who I watch on remaining college games.

Who declared return to college?

Zak, that just happened 2 days ago. The PFF article is from a week or so ago.

This is why I wait until after the season to start looking at the draft.

At this point in time I am looking to see which 2023 rookies have the most talent and have shown it. PFF does that for me. I cross reference with players I have seen play and was impressed with.

I could care less if one or ten players decide to stay in school or mock drafts
Landing spots are important and I look at team needs and potential FAs. I do this because I enjoy it and it gives me some info on MY picks and what I can do with them. It helps a bit in planning the keepers and waivers.

For example, I have Schultz, a legit top TE who cost me a 6th, a good keeper as there will be few if any available. I add Dulcich, a 22 year old coming on.

Can I keep him and get my 6th back? Can I add a rookie late who can play next year as a back up? What could I get for Schultz? Al this comes into play for me
which is why I like early rookie ranks, grades and reports.

You realize we still have the bowl games to get through? Players could end up seriously injured, and missing most of next season too (see Jameson Williams). Or they could put up amazing performances and their rankings could skyrocket. Even if you don’t believe in the Combine, there is still lots of football to be played.

Absolutely and the same can be said for keepers and the entire NFL. Who forgets about what was done so far? It would be silly.

I see the same for 2023 rookies. You Do NOT have to be involved.

No worries. I’ll be interested after the Super Bowl. The picture will be much clearer then.

And there is nothing else to do then, football wise.

I usually do some basic research on the upcoming draft class during the ongoing season, in case I want to make trades that involve future draft picks.

The more in-depth research indeed starts after the Super Bowl. Right now, I don’t feel it would make sense, as trade windows are closed anyway. And I have my hands full with the fantasy playoffs.

I’m doing the same Zak. Trade windows are closed but trade agreements are not. I have made verbal trades for future as have many and many times.

We will know our draft positions in a few weeks I want to know about players before then and have some time to spend.

I have also added Pacheco, Dulcich and Peoples-Jones, all kids costing last round picks, for future value. A bit of fun.

Zach Charbonnet has got my attention. I saw him play at UCLA and thought he was good but, he has played over 500 snaps each of the last two years and PFF grades him as Elite in both years. That grade is hard to come by.

In our league I see 5, maybe more rookies drafted in the top 4-5 rounds. I think managers are going to mostly stick with their keepers and in looking at the draft results must say that our league has dome a damn good job in their picks.

When will a QB or TE be picked?

I feel pretty good with the balance of my team, so I will likely take the best player available.