With the regular season in the books, we now know who has the first 18 picks in the 2023 NFL Draft:

Houston and Detroit with 2 top-18 picks. Especially the Lions could become a force next year, as the team already is pretty good.

The Eagles are one of the best teams in the league and still have a top 10 pick.

It will be very interesting to see what Arizona (3) and Seattle (5) will do with their picks. My guess is they will bolster their D, but both could surprise us.

New England will probably trade back at 14. Or pick a TE nobody ever heard of.

The main interest of fantasy is who will draft the top 5 RBs, the top couple of WR and who will be upgrading at QB.

We will be flooded with ranks, projections and mocks very soon.

Here are my wayyy too early positional projections for the first 18 picks.

Nice run down. Too early for me to reply but tend to agree.

Actually, they could go Brady AND still draft a rookie QB, just to have him learn from the GOAT.

If they proceed with Stidham, period, then next season will be lost from the start. Trading away Adams would just seal the deal they plan to tank from day 1.

I saw one mock draft today that had the Raiders getting CJ Stroud, which I was almost giddy about. Stroud beat Georgia, it was just Ohio State’s kicker that lost the game. I keep hearing a lot of chatter about the Kentucky QB Will Levis going early, because he has the size/arm strength combo that scouts love. 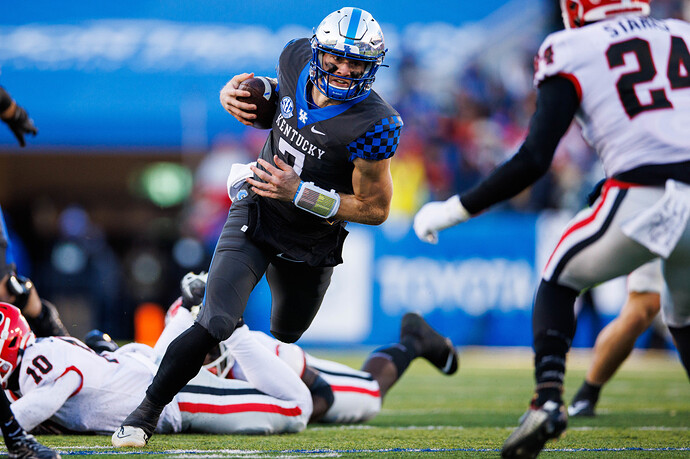 Will Levis had an inconsistent collegiate career, but his potential is through the roof. If he's available by the Indianapolis Colts' pick, should Indy pull the trigger?

Of course, GM’s can sell coaches on that, since all coaches believe they can “coach up” a guy to make lemonade out of a lemon. If Levis goes earlier than expected, and these early drafting teams tend to make bad decisions anyway (of course, I also have to include the Raiders in this classification), the Raiders could have a shot at CJ Stroud.

What should the Raiders do? They have so many needs, there is almost no wrong answer. However, they usually find a way to pick a Jamarcus Russell in a field of Calvin Johnsons.

Actually, they could go Brady AND still draft a rookie QB, just to have him learn from the GOAT.

Not impossible, but unlikely. Signing Brady would be a win-now move. But you don’t lean on rookie WRs in win-now mode. They could still draft a WR, but then probably a mid-round one.

If they proceed with Stidham, period, then next season will be lost from the start. Trading away Adams would just seal the deal they plan to tank from day 1.

That was my thinking. If they do not get a playoff-caliber QB for next season, they have little reason to retain Adams.

They would have to trade up then. The latest position I can see Stroud coming off the board is #4.

Stroud and Bryce Young are the standouts among QBs. They are the only ones in this class who can safely be considered plug & play QBs.

In the next tier, you have Levis and Richardson, who could also go in the 1st round, if a team falls in love with them. They look like they will still need some work, but certainly have the potential to surprise us if they get a starter opportunity early. Chances are teams will want to develop them for a year before throwing them into the lineup.

And then there are 4-5 more candidates who look like day 2 options, will probably require some work, but look like they may have a chance in the NFL.

If a team wants to draft a rookie QB they can safely plug into the lineup in September, they will have to trade up to #1 or #3, as Stroud and Young will go on #2 and #4 (not necessarily in that order).

The Raiders may have a chance to trade for the 1.03 from the Cardinals, as the Cards would only trade 4 spots back, but would still certainly get multiple picks as compensation, to help with their rebuild.

What should the Raiders do? They have so many needs, there is almost no wrong answer.

Or only wrong answers. Whomever they chose, you can always say “but they also need…”

IMHO, it wouldn’t be a terrible idea to sign Brady, retain Adams and tag Jacobs. They could then use their picks on bolstering their defense and o-line, which would help them in coming years, when their offense will inevitably fall apart.

Raiders are a mess. Brady was a shell of himself with few exceptions and is fool’s gold if he plays. Adams did not work, has diminishing value and is best traded now. Jacobs in a tag and trade would add something.

Time to blow it up and start fresh with a new coach and GM. Just my view.

Time to blow it up and start fresh with a new coach and GM. Just my view.

I already suggested that., But since they decided to trade/drop Derek Carr, that option is off the table.