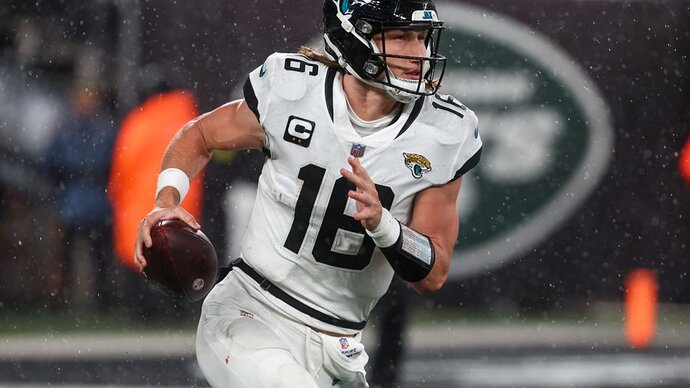 There was no passing game by anyone except for T Law to Engram for 100+ but that was on short passes and YAC,

Lawrence did score 18 but with 50 yards runnng and running for a short TD.
Etienne did well with 13 points on 25 touches.

Jets were a train wreck.

I pulled a Zak in this game. I saw what the weather was going to be and picked up the Jax D BUT, forgot to put them in my line up. They scored 14.

Zak pulled a Zak in his SFLEX dynasty and threw Zonovan Knight into the lineup in a last-minute YOLO move. Boy, did that stink. Thankfully, my opponent started the Jets D, and I’m way ahead in projections, so things could still work out.

I’m running against Engram in the South Beach league…

On a side note, I guess last night’s game was the final nail in the coffin of Zach Wilson’s career. Boy, was he terrible. When he eventually got benched for Chris Streveler, that 4th string QB looked a ton better than Wilson did.

LOL I should just go back to bed and stay there for a week waiting for this black cloud to pass. It will not be a bad place to be as Miami gets it’s first cold spell this weekend dropping into the 40’s.

watched the game and the “fans” booed him after throwing a pass away to avoid a sack. In my view it did have an effect on Wilson. He may thrive in a different city.

If that city hosts a team that plays a different sport, maybe.