We have another week of Jameis Winston sitting out due to his back injury: 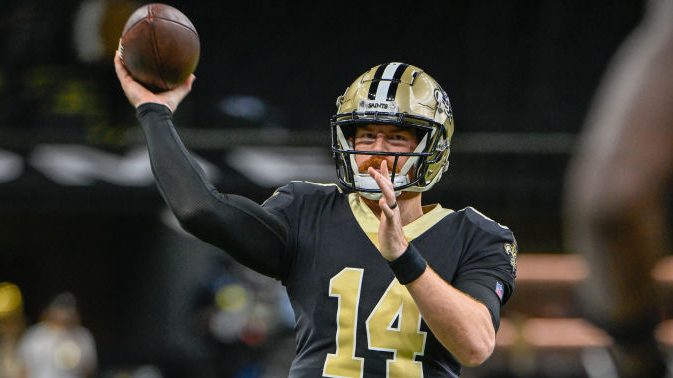 There will not be a matchup of quarterbacks drafted first overall in New Orleans this weekend.Saints head coach Dennis Allen said that Andy Dalton will make his third straight start in place of Jameis Winston when the Bengals visit the Superdome on...

In one of my deep dynasty superflex leagues, I am literally starting Cooper Rush and Skylar Thompson (and yes, he is having his first career start this weekend), because Winston is out and Derek Carr is on bye. But as I looked at it, a hypothetical struck me: What if Skylar does well? Would I start him over Winston next week, assuming Winston plays next week?

At this point, Winston hasn’t been the QB I expected. In the first 3 weeks he played, he was QB7, QB26, and QB14. Not terrible, but it definitely leaves room for improvement. In the dynasty league I mentioned above, they penalize QB’s for sacks, and Winston took 11 of them in those 3 weeks. Common football knowledge tends to lay the blame for sacks on the QB, since they ignored the rush and didn’t get the ball away quickly enough.

But what pushes Winston into consideration for being traded away, or even dropped outright, is missing 3 straight weeks since the start. If the sacks he is taking are his fault, and it has been complained that he doesn’t check down to Alvin Kamara nearly enough, then this is a flaw in his game, which will only continue to lead to more injuries in the future.

You have to consider your league. The dynasty superflex league like the one I described above, has deep rosters, and QB’s are at an extreme premium. You will NOT just grab a QB off the waiver wire in an emergency, unless you need a 3rd stringer who won’t see the light of day behind a perpetually healthy starter. I literally have 5 QB’s on that roster, including Malik Willis. I could trade away Winston, but I would never just cut him.

In fact, in both of my deep dynasty superflex leagues, I have made trade offers involving Winston. No responses yet, but here they are for the record:

Dynasty league 1: Winston and Jaylen Waddle and a 2nd and 3rd round pick FOR Garrett Wilson and Matt Corral and a 1st and 2nd round pick.

Dynasty league 2: Winston and Darren Waller FOR Taysom Hill and a 1st round pick.

Keep in mind, 1st round picks will be worth a bit more next year due to the quality of the draft class, so even a low 1st round pick should bring someone useful.

I only had Winston in one redraft league (only 1 QB starting), but there are plenty of QB’s on the waiver wire there, including Justin Fields, Zach Wilson, Daniel Jones, and Jimmy G., just to name a few. So I decided to take a shot and cut Winston and grabbed Skylar Thompson. I figure it is only a week before Derek Carr comes back from the bye, and worth a gamble. If Thompson fails in an offense with Tyreek Hill and Jaylen Waddle, I can dump him for another backup (because Carr is my likely starter), probably Zach Wilson. Then again, if Skylar does very well against a soft Minnesota pass defense, it could start rumors of replacing Tua/Teddy with him. Granted, that is a pie in the sky scenario, but it could play out. Remember Kurt Warner?

Every league is different, and you have to consider Winston within the construct of your own league. But get rid of him if you can.