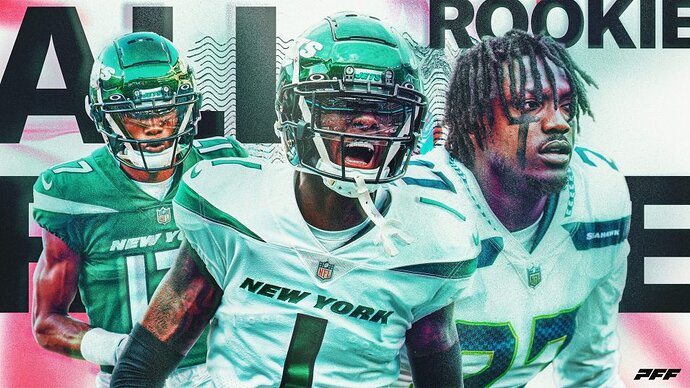 The 2022 NFL All-Rookie Team is highlighted by the New York Jets dup of Sauce Gardner and Garrett Wilson.

This is PFF based on them grading every snap the entire year.

London looks like another perfect fit for Arthur Smith’s offense. He made a ton of tough catches, going 14-of-26 (53.3%) in contested situations this season. He finished with 72 catches for 866 yards and showed a rapport with QB Desmond Ridder late in the season, posting a career-high 120 yards in Week 18.

Wilson’s dynamism popped every time you turned on the tape this fall. He moves the same way the elites at the position do. He hauled in 83 passes for 1,103 yards and four scores, breaking 22 tackles in the process. That last figure trailed only Deebo Samuel among all receivers in the NFL. The first-rounder dropped only two passes in a season Jets fans should be thrilled about.

Olave was as advertised in his rookies season. He was as pro-ready a route-runner as you’ll ever see in the draft, which bore out from Day 1. His 2.42 yards per route run led the rookie class and ranked seventh in the entire NFL — an elite number from a first-year player.

All three WRs they list looked great last year with not having VG QB situations. London had the worst but it improved with Ridder.

I expect all three to be stars.

I will agree with Brock Purdy as the best of the rookie QB’s, with Kenny Pickett as runner-up, but a lot of this has to do with the 49ers system versus Pittsburgh’s system (OC Matt Canada can be found in a soup line near you!). But I also liked Purdy as he showed more poise than the other QB’s in this class.

Allgeier wins among the RB’s? If Breece Hall had finished the season, this discussion would have been a no-contest, but it is what it is. But Allgeier over Kenny Walker? As much as I like what I saw from Allgeier, it’s hard for me to make this case, except for his yard after contact per carry was pretty good.

At TE, I still say Isaiah Likely showed me what I expected to see in limited action. Nothing against Okonkwo, who is also a solid rookie TE.