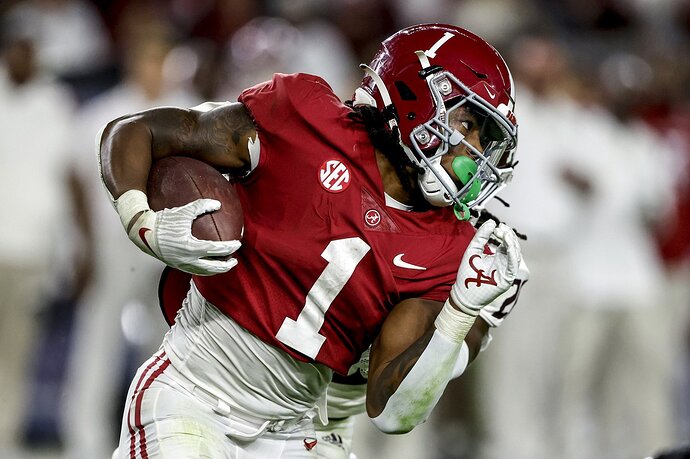 With the NFL regular season hitting it's stride, here are our updated 2023 dynasty rookie rankings for fantasy football.

Good read on updated rookie picks at the half way point. This is the draft I was raving about before the 2022 draft. It is absolutely loaded at RB, WR, QB and even TE.

The big question will be where keeper and redraft leagues draft these players.
The past norm has been 4th-5th round for a select few rookies. Then more starting in the 7th round with most in late rounds.

Will this draft change things?

Here are the top 4 RBs. Robinson is called the best since Barkley with Gibbs as another Kamara. Much football to be played and much to analyze but they with Evans and Corum look like impact players and there could be other RBs.

Bijan Robinson is the best prospect we’ve seen come out of college since Saquon Barkley. I feel like that’s all I need to say. The NFL knows this too, and Robinson is about as sure of a lock as it gets to buck the recent trends and be a first-round pick. Take that “RBs don’t matter” people.

Robinson is as complete of a back as you could ask for in today’s modern game. He has deep speed (likely 4.4 to low 4.5 range), the agility to make someone look foolish grabbing at air, and the power to run through their chest and soul.

Robinson can catch the ball, too, as demonstrated by his reception vs. Iowa State and his 2.14 yards per route run when split out. He has a career average of 6.2 yards per carry, with 4.5 coming after contact, and in 2022, he has 75 broken tackles, which is miles ahead of the next closest RB on a per-game rate. He also sits No. 1 amongst 2023 eligible RBs at 2.38 YPTP (yards per team play).

Through nine weeks, Robinson has seven straight 100-yard games, including a 209-yard outing against Kansas State, and sits No. 6 in the nation in rushing (1,124). We can only hope he is drafted by a team that will treat him as such — something which is becoming more and more of a rarity in the age of committees. He’s as close to a “can’t miss” prospect as you’ll find.

No doubt Robinson is the real deal, but Jahmry Gibbs is my favorite RB in 2023 dynasty rookie rankings. He’s an elusive inside/outside-zone rusher who screams Alvin Kamara comps when you watch him on film.

Whether returning kicks, rushing, or receiving, Gibbs brings a rare dynamic skill set to the NFL. Smooth is the best way to explain Gibbs’ style, but in an instant, he can hit someone with an electric cut. He also hits the measurables at just under 6′ and should come in right at or just north of 200 pounds.

Gibbs is a plus receiver who not only excels in “traditional” routes but down the field as well. There’s a difference between a pass catcher and a pass-catching weapon. Gibbs is the latter.

He’s Kamara with 90% of the contact balance and just as quick feet. If that doesn’t excite you, I don’t know what will. Depending on team need, scheme, and draft capital at their disposal, I wouldn’t write it off that Gibbs could be the first RB selected in the 2023 NFL Draft.

We’ve yet to see a complete season from Zach Evans, but all the traits you’d expect from a former five-star recruit are there. Evans has legit breakaway speed with a laser-timed 4.51 40 coming out of high school, and it shows in games. After averaging over seven yards per carry, Evans made a somewhat surprising transfer to Ole Miss but never missed a step.

His 136 yards on 21 carries in Week 7 was another stamp on his already fantastic profile, and through eight weeks, he had 108 carries for 675 yards and seven touchdowns but hasn’t been able to showcase his receiving chops with just 93 yards on eight receptions (12 targets). However, he did score his first receiving TD against Auburn.

Evans will bring some PPR upside at the NFL level, but likely won’t see more than the typical swings and flats as compared to Gibbs. If he lands in a zone-oriented scheme, Evans should remain firmly in the top four RBs in 2023 dynasty rookie rankings.

Not only is Blake Corum the No. 4 RB in 2023 dynasty fantasy football RB rankings, but he is going to be in New York on that Heisman stage as a finalist. I’m not saying he’s the best RB in this class, but he has performed as well, if not better, than any other RB in the nation and could hit RB3 in this class over Evans, depending on landing spots and further metrics.

He might be 5’8″, but that guy is rocked up. If Corum does weigh in at 200 pounds or a bit more, the sound you’ll hear is his draft capital exploding. Corum uses his height to his advantage, being willing to stay behind his OL until a hole opens up, then he takes off into the second level.

With fluid hips and a low center of gravity, Corum can break a home-run play at any time. In fact, Corum’s 16 touchdowns are tied with Pitts’ Israel Abanikanda for the NCAA lead.

After rushing for 243 yards and two touchdowns against Maryland, Corum has been on an absolute tear. He now has six games straight with 100+ yards and a score, including 166 yards against the then No. 5 ranked rush defense of Penn State and 177 yards and a TD on 33 carries against rival Michigan State, which certainly felt sweeter after the ridiculous tunnel incident.

Corum had 24 receptions in 2021 (eight in 2022 – 4.8% reception share), but receiving isn’t the defining trait of his game. It’s more to do with Michigan’s scheme and having Donovan Edwards, who excels in those situations despite being a sophomore. Corum profiles as a starting RB in part of a likely committee as a power back for short yardage and goal-to-go work.

The top four WRs as of now are pretty much equal depending on you taste. They are all special.

Some will find it blasphemous not to have Jaxon Smith-Njigba as my No. 1, and before you lose it, just look one spot down. Similar to the 2023 RBs, the receivers in this incoming rookie class are ridiculously talented, and in all reality, we have a Tier 1 of four guys, so it’s a bit of picking your poison.

Unfortunately, Addison’s stats likely won’t stand up to others in this class. He suffered a leg injury against Utah and was seen on crutches but luckily avoided a major injury. If it was me, Addison could take the Ja’Marr Chase approach and hang up the cleats and focus on the NFL.

Addison plucks the ball out of the sky and explodes to the high point. He’s a twitchy runner who also is a serious threat after the catch. I can’t help be see a lot of Justin Jefferson in his game, and we know where Jefferson sits in dynasty rankings.

If the NFL rules were different on draft eligibility, Smith-Njigba would be in the NFL right now. As a sophomore, he was everything and more for an otherwordly talented OSU offense.

MORE: What Is a Dynasty Rookie Draft?

His hands and route running are phenomenal. He’s an elite separator, has sensational body control, and is as smart as it gets with how he operates over the middle of the field against zone coverage. The only thing missing from his skill set is top-end speed.

It also appears that Smith-Njigba is set to return at some point in 2023 but when is up in the air. It looked like it would happen against Penn State, but he was inactive. I don’t care if he plays or not, honestly. We’ve seen more than enough out of him already to know he is NFL-ready. At this point, all I care about is the landing spot.

Everybody has a type of people they go for in life. I know I do, but I’ll keep this to football and not my dating history.

When it comes to wideouts, I’ve got a thing for the big dudes. The ones with the size you can’t teach that can just alpha someone at the catch point. That’s Quentin Johnston. Of the Tier 1 guys, he’s the only one who has truly broken out in 2022 and improved his draft stock compared to Addison, JSN, and Kayshon Boutte.

At 6’4″ and 210+ pounds, Johnston’s got a size advantage over 99% of corners and uses every inch of his frame to high-point with the best of them. But for a guy his size, Johnston has a surprising level of burst and acceleration. He’s also surprisingly agile out of inward routes like slants when he sells the outside move.

Of the top-ranked receivers of this class, Johnston might be having the most impressive season so far. After a slow start, Johnston put up 206 yards with a TD on 14 receptions vs. Kansas, and in Week 7, he had 180 and another score vs. Oklahoma State. Through eight games, Johnston sits 10th amongst 2023 WRs with a 2.40 YPTPA (yards per team passing attempt).

He’s checking all of the boxes. I’m betting on Johnston’s upside as a top-four WR at minimum in 2023 dynasty rookie rankings. If anything, I can see some preferring Johnston as the No. 2 wideout of this class or even No. 1 overall even if that’s not where I’m at currently.

Back in 2020, Kayshon Boutte was my top receiver in this class, and not much has changed. The former SEC Freshman All-American is an explosive receiver that can align at a multitude of positions, whether it’s on the perimeter, as an X, or in the slot. Boutte even broke the SEC record for yards in a single game back in 2020 with a whopping 308.

Once he has the ball in his hands, Boutte has enough strength to break a few arm tackles, and then his speed kicks in. He’s as smooth as it gets when at full stride and can stack darn near any corner you line up against him. When Boutte comes out of breaks, there is an explosion in every step, which is how he creates separation.

The numbers won’t wow you. Boutte had 1,244 yards in his first two seasons and has 288 and a TD on 27 receptions this year. But we must remember there has been a coaching change over this time and an inability to replace the hole left by Joe Burrow. Boutte led the NCAA in touchdowns through six games last year before suffering a season-ending injury.

His best game so far in 2022 came against Florida with 115 yards on nine receptions, but he has been sub-45 yards in the other six of seven games, and barely snuck out with a 51-yard outing in the team’s incredible victory over Alabama. Boutte is one of those WRs who will instantly out anyone that is a “box-score evaluator” that uses those to tell them who is good or not.

Boutte is great at high-pointing but could work on consistency in contested catches (27.8% catch rate) and his hands (12.5% drop rate). He hasn’t boosted his stock in 2022 thus far compared to others, but the upside is great enough to overlook some of the numbers, as stats/spreadsheets don’t win routes or get you open in the NFL.

He fits the mold of the modern NFL, where a No. 1 target is more in the slot rather than a traditional “X” that can take a five-yard slant and turn it into a 50+ yard gain. This is a process over stats ranking.