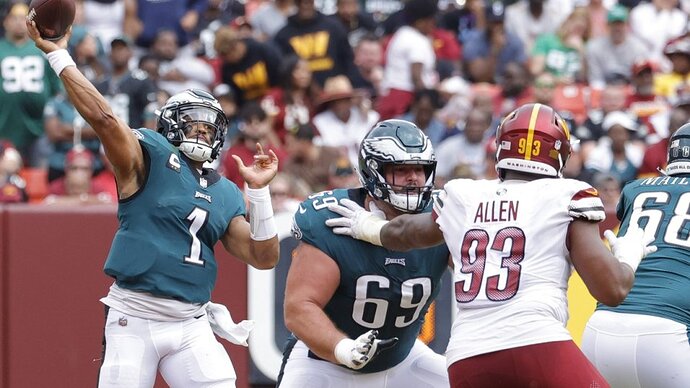 The Philadelphia Eagles maintain their No. 1 spot in the offensive line rankings, while the Baltimore Ravens are the biggest risers after climbing eight spots from last week.

Why the hell would I put up an OL thread on a fantasy forum?

Because we all know O starts with the Big Uglies up front. Most questions on why a player is off to a bad or good start can be answered by the OL.

Ekeler and Mixon are great examples, Both teams said they improved their OL’s. They lied and these guys are running into brick walls.

New guys on the OL take a month or so to mesh and the question is how all these teams will end up.

IF good and you give up on a player and move him, you will regret it.

IF bad and you do not move on from a player, you will be pissed.

So true. Offensive lines can make or break a team. Too many teams concentrate on the skill position players, when their o-line is the problem/solution. A great o-line can make average players great (see Jonathan Taylor).

True. Now for the tricky part: how to tell before the season which o-line will be great? Once the RB has gone through the roof, it’s too late for fantasy purposes.

You and me will have to eat a lot of crow for laughing about the experts who predicted Saquon could be elite once more this season. Looking back at my reasoning why I don’t think he could be more than the #10 RB at best, I still like that reasoning. Still, barring an injury, I was obviously wrong.

Looking back 6 weeks, what should have told me that the Giants’ o-line will allow him to increase his rushing yards per game by 150%?

Thursday night was a good illustration. Mixon is a VG RB but was running into a 300 pound defender brick wall with nowhere to go.

Miami had one of the worst OLs in history last year but added a couple, changed coaching and to a zone blocking scheme. They are FAR from great but decent enough to give Mostert some room to run.

The big question for Managers is if you have a guy you know is good but his OL sucks, do you hold em? How long?

Each OL is different with having vets vs rookies and injuries but I have found on average after 4 games you have a pretty good picture.

I’m still not sold that Saquon isn’t a mirage.

The big question for Managers is if you have a guy you know is good but his OL sucks, do you hold em? How long?

It depends on the “guy”. In the case of Najee Harris, he showed last year he could still produce behind a bad line. Barry Sanders was the textbook case of “greatness can overcome bad o-lines”.

If you’re talking about a more pedestrian RB, like Jonathan Taylor, then he needs his o-line to produce. If the o-line isn’t giving him holes so he can hit the second and third levels of the defense, then Taylor is done.

Each OL is different with having vets vs rookies and injuries but I have found on average after 4 games you have a pretty good picture.

Correct, although that can change with injuries later in the season.